With one seventh of the world's population overweight and an elderly population expected to double to 1.2 billion by 2025, healthcare expenditures in developed countries are exploding. This situation, compounded by the scarcity of qualified medical personnel (general practitioners, nurses, etc.), and an at-stake tax base as the first baby boomers are about to retire, are fueling an increased demand for telehealth solutions. Through the remote collection and regular transfer of physiological parameters, telehealth can be seen as a tool of increased productivity and quality of care since it has the potential to help improve physical fitness, reduce the cost of chronic disease management, and allow elderly people to remain living in their own home.

The Continua Health Alliance, an industry consortium promoting telehealth and guaranteeing end-to-end interoperability from sensors to health record databases, has defined in its version 1.5 design guidelines, a dual interface for communication with physiological and residential sensors (See Figure 1) showing a Personal Area Network (PAN) interface based on the recently approved Bluetooth Low Energy (BLE) standard and its health device profiles, and a Local Area Network (LAN) interface, based on the Zigbee Health Care application profile. Both standards are relatively similar in terms of complexity but BLE, as it name implies, tends to have a longer battery life primarily due to the use of short packet overhead and faster data rates, reduced number of packet exchanges for a short discovery/connect time, and skipped communication events, while Zigbee benefits from a longer range and better reliability with the use of a robust modulation scheme (Direct Sequence Spread Spectrum with orthogonal coding [32,4]) and a mesh-like clustered star networking technology. 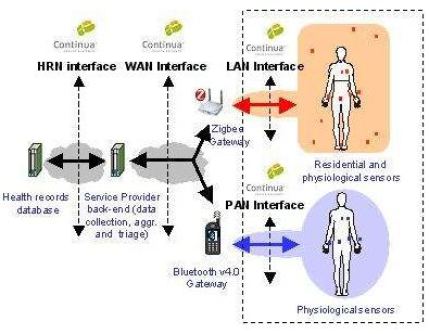 Both interfaces are well adapted to their respective usage context, from on-the-move on one hand to home use or assisted care facilities on the other, but the flip side to that coin is that the Continua dual interface concept is likely to cause user frustration given the lack of interoperability between the two specifications, which negatively impacts the wide adoption of telehealth systems. There are also many end-user scenarios that could benefit from the support of both standards with the end-goal of either enhancing user experience or improving health risk detection. For example, the electrocardiograph of a patient suffering from cardiac arrhythmia could continuously stream heart activity data, either through a Zigbee gateway or BLE-enabled cell phone (depending on the availability of these two standards in a given space-time), thereby providing instant alerts and potentially saving lives as a result.

Supporting both BLE and Zigbee within the same device does not necessarily mean that the overall cost of a sensor node would double. Indeed, both solution types not only have many functional blocks in common but also present several similarities at both the application layer (with the use of a similar object-oriented database concept for the provision of dedicated services) and even more so at the radio level. More precisely, BLE waveform uses a Gaussian Minimum Shift Keying (GMSK) modulation scheme while Zigbee is based on Offset QPSK (O-QPSK) with half-sine pulse shaping, which is similar to GMSK but with the removal of the Gaussian shaping filter. As such, it is possible to easily support both standards through the use of a reconfigurable transceiver with a digital IF sub-sampling architecture on the receiver side (Figure 2).

In this case, the input signal is first amplified and down converted to an intermediary frequency before being filtered and sub-sampled. Sub-sampling has the effect of generating a replica of the original spectrum at a lower frequency close to DC. This alias signal is then processed digitally where it is first centered at DC before getting low-pass filtered and finally demodulated. Being massively digital and entirely reconfigurable, this radio architecture allows the support, at a zero cost premium versus single-mode Zigbee or BLE solutions, of both standards for more safety and improved customer satisfaction. Moreover, it presents the additional advantage of being cognitive since it would be possible to adjust the performance level to a given radio context. In other words, linearity, sensitivity and filtering levels could all be dynamically modified as a function of propagation losses and interference level conditions at a given time, thereby further reducing peak power and increasing battery life.

However, the Continua dual-interface is not the only showstopper to wide adoption of telehealth systems. The lack of flexibility and limited integration level of existing IC solutions will also prevent telehealth products from reaching critical mass worldwide. In order to realize custom telehealth products with a high level of integration and in a cost-effective manner, one has to adopt a different approach than the one presently used (2D SoC integration) through the design of a modular 3D-IC. The latter, leveraging Cu-Cu direct and Ox-Ox molecular bonding techniques, consists of stacking up to 5 dies (Figure 3) depending on the configuration chosen by a given client: a base die implementing the whole BLE standard and a portion of the Zigbee specification, a complementary die supporting the remaining functions for the realization of a complete Zigbee solution, a MEMS sensor die (e.g. accelerometer, pressure..., a passives die integrating some RLC components into silicon, and a power/energy scavenger die (e.g. thermoelectric, kinetic generator...).

The advantages associated with this approach include: a separate and optimized technology process for each die, flexibility for the realization of custom solutions, lower power drivers, easy upgrade, and smaller footprint. Benefits also importantly include lower development costs and higher manufacturing volumes. 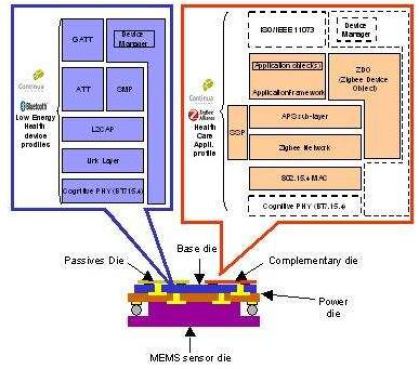 Additionally, a modular 3D-IC approach is also well suited to needs of the future textronics industry, which will consist of integrating electronic components directly into textile. More precisely, 3D-IC physiological sensors could be inserted within the fabric of a garment by using a chip insertion technique such as Diabolo developed by the CEA-LETI. Diabolo places, within the textile fabric, extensible metallic wires onto which electronics components are attached. Presently the metallic wires are only used as mechanical support for the insertion of basic ICs such as LEDs and passive RFID tags. But one could imagine a more elaborate design whereby a health sensor 3D-IC is used instead.

This health sensor node could be made of two parts: an energy-scavenger/thermopile and a wireless sensor node (WSN) 3D-IC as shown in figure 4 below. The thermopiles, through the use of thermocouples connected in series, would convert the thermal energy dissipated by the human body into electrical energy. Indeed, it is already possible to achieve a significant level of electrical energy, in the order of 4mW/cm2 with a 5° temperature difference  by bonding two wafers with P-type thermo-elements on one side and N-type thermo-elements on the other,  so that a high density of thermocouples is achieved. The generated electrical energy would then be distributed through the metallic wires to the power chip of the 3D-IC where it would be conditioned, stored and finally distributed to the remaining parts of the WSN 3D-IC. 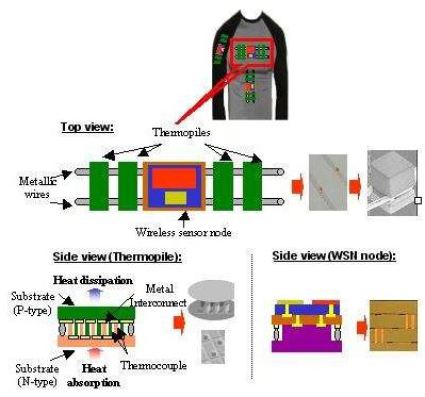 While the telehealth market potential as a whole including such market segments as sports/fitness, chronic disease management and aging independently is indeed promising - with estimates between $1.9B and $4.6B by 2014 according to market analysts. Technical roadblocks and regulatory ones have prevented this market from reaching its full potential so far. However, this situation will change with the introduction of a modular, reconfigurable and cognitive 3D-IC approach that allows for the realization of custom telehealth systems in a cost-effective and highly integrated manner, while dynamically and power-efficiently supporting the complete set of sensor communication methods defined by the Continua Health Alliance.